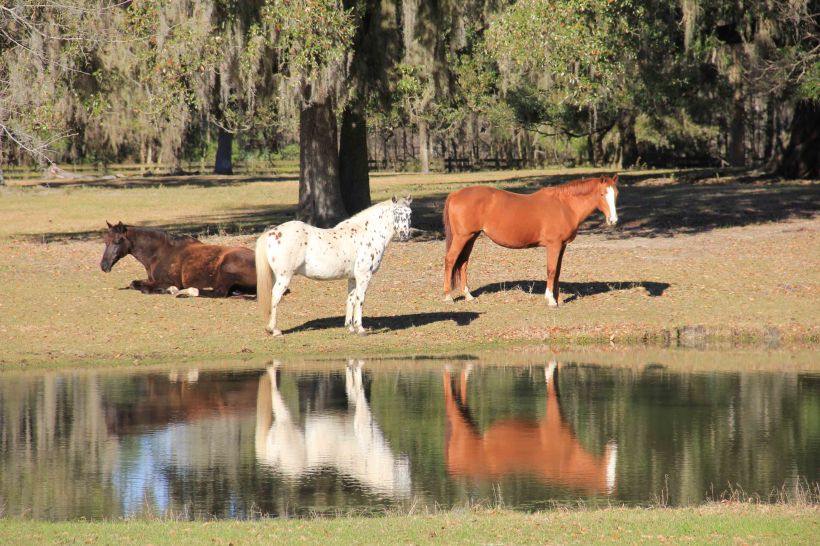 Our horses live together as a herd. Now, that may seem like an obvious thing for a horse, but you would be surprised at how many horses are kept otherwise. In fact, each one of the horses meandering around my back pasture right now were at one point kept in boarding stables. That meant standing in a stall for a good chunk of the time and being “turned out” for limited hours of the day into a small paddock — alone. The whole point of such an arrangement was to keep the horse from hurting itself or others by being .. well, by being a horse. Go figure.

It takes some time for a group of horses to assimilate as a herd. It’s easier on them if the membership is constant and if you have some sense of the individual compatibility of the horses being put together. Even then, you have to be willing to tolerate some roughing up, squealing, chasing, and general naughtiness, especially in the beginning while the group establishes their pecking order. Quite a few sparks flew when I first introduced Andante into the herd. She was aloof and sure of herself which left the geldings squabbling amongst themselves for the right to hang closest to her. Filou was desperate to be that guy and in a fit of temporary insanity marched over to Andante and bit her on the shoulder, hard, to show his love for her. She rewarded him with a perfectly placed kick to his departing rear. That was worth a vet call, times two. Somehow his efforts worked though. Maybe the rest of the geldings bowed to his bravery or maybe they were afraid of her and figured he could have the job. Either way, that became the settled way of the herd; Filou was with Andante

It stayed that way to the end of Filou’s life, even the last days when he was not able to walk from his stall. I made sure of that.

I knew it would be Beamer taking Filou’s place next to Andante; again, not that Andante was in particular need of a buddy. Beamer was always, always hovering. As Filou aged, Beamer’s persistence wore Filou down and, from a distance, it looked like they had formed an agreeable trio.

Still, in all important matters, Filou was the one who insisted on being alone by Andante’s side and it was the youthful Beamer seen retreating from Filou’s snaking neck and bared teeth. It meant much more to Filou and Beamer knew it.

Legs was the fanciest of show horses and was in that role for a good long part of his life only becoming ours at his retirement. He needed to be introduced slowly to everything; even being outside in an open pasture was a strange and new experience for him, let alone doing that with a herd. We started him with Boo, off by themselves.

By that first afternoon together, Legs and Loosa had sized each other up with the proverbial version of a horsey shoulder shrug and set about grazing together. They were perfectly content to share the bottom of the totem pole and have been best buddies ever since.

Loosa is more curious and, dare I say brave, so if Legs has trouble with something, I just bring Loosa along. The first time I asked Legs to go for a trail ride away from the barn, he made it two feet (and I mean just his two front feet) onto the path out. The next time, Gordy rode Loosa and together we went down the road and up the hill and across the creek until our shadows grew long in front of us. Loosa gives Legs something I don’t always have and that’s okay. He seems happy to share.

The donkeys are always together, no exceptions.

They can be together in different places and, in fact, seem to like the variety. Some days, they greet me at the gate hollering (technically, it’s called braying, but it really feels like hollering) to be let in for some hanging around time with Boo and Belle.

This will last for several days and then the crew will be clustered with heads pressed against the gate and (you guessed it) holler at me to let them be with the big herd. And I do. Whatever the donkeys want, I try to give it to them. That way, when the vet comes to do vaccinations and I ask them to please be good for her, they are. Really. That’s how it works with donkeys.

There are many layers to horse herd dynamics and the same goes for a pack of dogs. I don’t know what the magic number is to make up a pack, but with six of them in the family, I’m pretty sure we qualify. We are lucky that three of the six are Italian Maremma livestock guardian dogs. I say lucky here specifically because of their built-in instincts to be kind and tolerant of the antics of their flock. The horses and donkeys, and especially Boo and Belle, are their flock. I am often treated as flock as well, which warms my heart to no end, but not one of us tests their ability to tolerate antics as does the little, but mighty Miss Monroe. She is a spitfire, that one. She is a terrier and a young one,  so that whole spitfire thing is god-given.

Most of Monroe’s time and exuberant energy is spent with Giada, a Maremma, but young like Monroe. Gordy and I have been amused, bemused and parentally exhausted by the combination of the two of them. They never stop. Sometimes we think we should ask Giada to be more serious and mature about such matters; you know, set a good example, bring that steady Maremma influence to bear. I think that ship has already sailed and Giada was most certainly not on it. The day Monroe came into the fold was the happiest day of her young life. They are two free spirits and it is Gordy and I who must adjust, which we do. Mostly.

Anyway, I’m not sure Giada is the problem here. Monroe seems capable of stirring up trouble — er, having fun — no matter where she is and who is in the room.

This may appear to be a snaggle of Maremmas, but look closely: see who the culprit really is? Three Maremmas and only one Miss Monroe to go around? No problem.

No one is more patient with Monroe’s antics than Marco. He outweighs her by almost 100 pounds, but never ever uses that against her. To the contrary, he lets her win every time.

And that’s what makes those Maremmas so wonderful. Though they take their protection responsibilities oh so seriously, they are still up for a good time.

The elder states-women of the pack (aka Gracie and Molly) are more like us —  a bit amused and bemused and exhausted by all the commotion. They have found a rhythm and pace of their own to share; two aging pups with good life left in them. Sometimes they play too, but mostly they watch and then, because it is time for dinner or a treat or a good, long nap they saunter into the house, together.

A herd and a pack. Pretty darn special to be a part of, if you ask me.

One thought on “A Herd and a Pack”