Facebook has been serving up little reminders to me about what was happening in our lives one year ago. Yesterday, it popped up a picture of the moving van. That was the day our possessions started the cross-country trek from California to Florida.

Today, Facebook showed me the picture of the horse van.

That one choked me up a bit. The big van showed up early morning and we started loading, Andante first into the front compartment, because she is brave and certain and I can count on her. Filou leaping on next, unwilling to be separated from Andante for a nanosecond. Then it was the boys  – Beamer, Loosa, and Legs, loading like pros into the back compartments with Loosa in the middle because he is good at keeping everyone company. The donkeys were next. They have been in a trailer but once in their lives and it was just a little horse trailer, not this big behemoth one, so they took some time considering the challenge and concluded that this was not a one-at-a-time situation; no this was a we-stick-together-or-die situation. So they scurried and jostled up the ramp all together in one donkey exodus, showing great bravery and trust in the process. So proud. Boo and Belle trundled up last to take residence in the middle and off they all went leaving me sobbing curb side. I would not see them again for six days. I was worried about their safety and well-being and I was worried about me. Without them, I am a great deal less sane.

Tomorrow, if Facebook is on a roll, it will pop up a picture of the truck and trailer, the means by which Gordy and I and the five dogs got ourselves to our new home.

We had begun our road trip early in the morning so we could make Phoenix by nightfall. The house closings in California and in Florida both cleared while we were on the road and for a bit of time we were technically homeless, swinging in the ambiguous air between letting go of one home while waiting for the next one to transact. The bed of the truck was loaded with equipment and possessions we would need to settle the horses and get by until the moving van arrived (which would be a week after we did). The front of the trailer was loaded with Gordy’s wine collection. Monroe and Gracie rode in the back seat of the truck, with the three maremmas in the horse trailer.

Now, Gracie is a front seat girl all the way. Always has been. Always will be. We wanted to be safe though, so we harnessed and strapped the two of them into the back seat with pillows and cushions to rest on. I will not kid you here. Strapping Gracie in was the only way she could be kept in the back and she despised it. Perhaps you can tell. It didn’t help that Miss Monroe was a pillow hog. 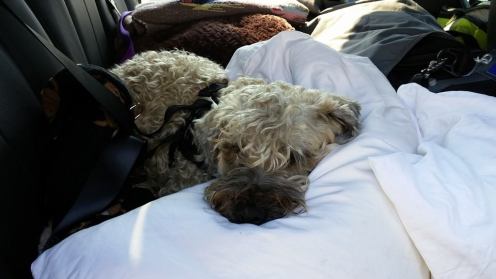 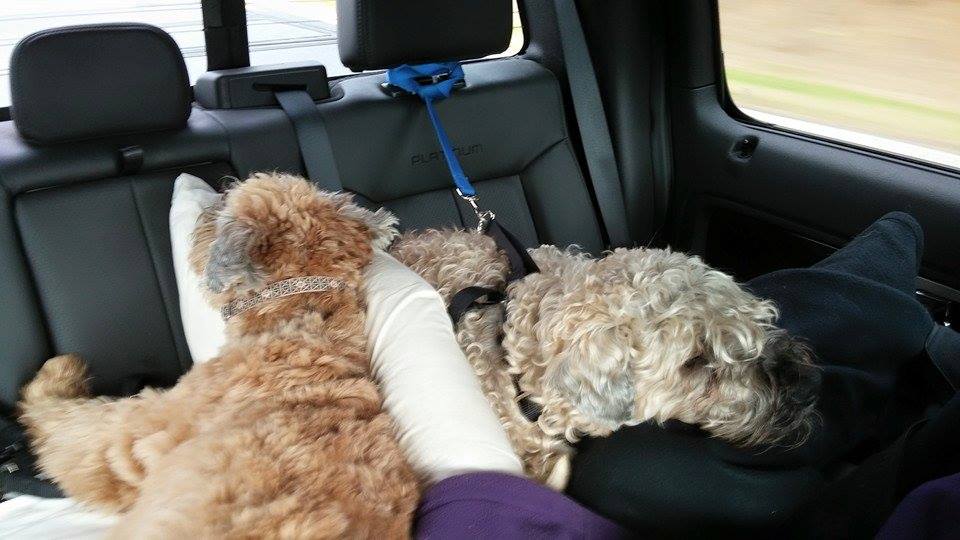 I had 5,000 worries about the maremmas’ travel plans. Oh my gosh, more than that; we were asking so much of them. Four and 1/2 days of hard travel in a horse trailer, walked only on leashes and in strange environs …. “What ifs” filled my head and none of them were good. Of course, I was completely underestimating the smartness and wonderfulness of those big pups. They were superstars, even at the hard parts. They garnered a lot of attention at truck stops and rest areas when we would open up the side door of the horse trailer and the three of them would hop out to haul us across the parking lot.

Monroe missed her good buddy, Giada, and after our rest stop walks she would sit with them for a bit to people-watch through the screen door of the trailer. 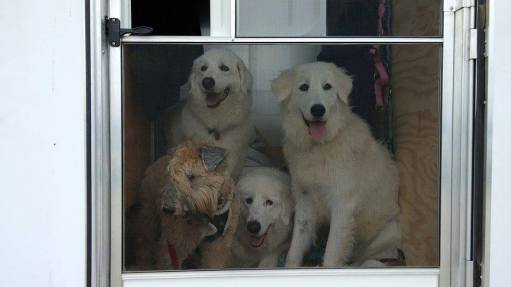 Gordy is the superhero here. He was worried, too, especially about the maremmas alone at night in the trailer. His plan was to camp out with them in the trailer while Monroe, Gracie, and I climbed into a warm hotel bed. That plan worked well enough for our first night in Phoenix. But, we ran into a raging ice storm in Texas, a white knuckle experience filled with jack-knifed semis skating across the frozen tundra of nothingness that is west Texas.

We pulled into our hotel very late and very exhausted. Gordy, my beloved, tried to stay with the pups, but at 26 degrees and in an aluminum trailer, even three maremmas will not warm you up enough to stay comfortable. At 2:00 in the morning we hauled the pups out of the trailer and into a back stairwell of the hotel, taking turns sleeping with them on the floor. That one took a lot out of us, but the three big dogs took it all in stride.

Two more days of travel got us to the Florida panhandle without too much of a fuss. The next day we would be home, our new home, and the dogs could run free and we could sleep in our own bed, new and freshly delivered for us. Well, that was the plan, anyway. Monday morning as we started on the last leg of our trip, our realtor called. The house sale closed on Friday, but we had given the sellers, an elderly couple, the weekend to finish moving out. We wouldn’t be there anyway, so what was the harm in being nice, right? The harm was that they were confused and disorganized and a little bit crazy and come Monday, they were still fulling occupying the house — OUR house. They thought they could be out by Wednesday though, as in two more days to go.

Now, maybe if that whole ice storm thing hadn’t happened, I would have been more chill. I would have laughed even. No, that’s not true. I would NOT have laughed, but I might have been more chill. I was not. Gordy, the dogs and I were all road weary  and not one of us wanted to spend one more night in a trailer or a hotel stairway. So I calmly and clearly — Flipped. Out. It’s what lawyers do, with a good chunk of righteous indignation heaped in for good measure.

“I’ll call you back”, said Becky, our realtor, and we drove on in dazed disbelief, trying to think of solutions to our dilemma that did not involve strangulation. We settled on giving the sellers one more day and dear, amazing Becky called in favors from friends in high places to get us a suite at the Residence Inn, which does not allow dogs, but allowing our dogs — all five of them — to stay with us. We did stop at the house to let the dogs run in the pasture, their first time off-leash in five days and, oh my gosh, what a joy. While we unpacked the truck, Gracie assumed her rightful position in the front seat, re-imagining the trip the way it should have been.

We communed with the sellers and helped them pack and told them not to clean the house, anything to make this happen, and at dinnertime, we headed to the hotel. How nice this will be, we thought, considering the circumstances.

And it was. Except for the part that the suite was on the third floor and the Maremmas didn’t do stairs, having never learned them. Turns out, you can haul a Maremma up a flight of stairs once, but you cannot haul a maremma down stairs, ever. Fortunately, there was an elevator and they were used to being in things in motion. Also, there was the part where I was out walking Gracie and Monroe when the pizza guy came and Marco, desperate to find us, shoved through the door, Gordy lunged for him, and the door snapped shut behind both of them. What a surprise to find Marco jubilantly waiting at the top of the stairs for us, Gordy in near pursuit.

The point is, we survived, and we can laugh about it — now. We love this place, what we have done to make it ours, what it has become to us. The horses are happy, happy, happy here. So are the pups. What more could we ask for, really? Well, one more thing: the kids are coming to visit us. All of them, big and small. Now, that makes it home.