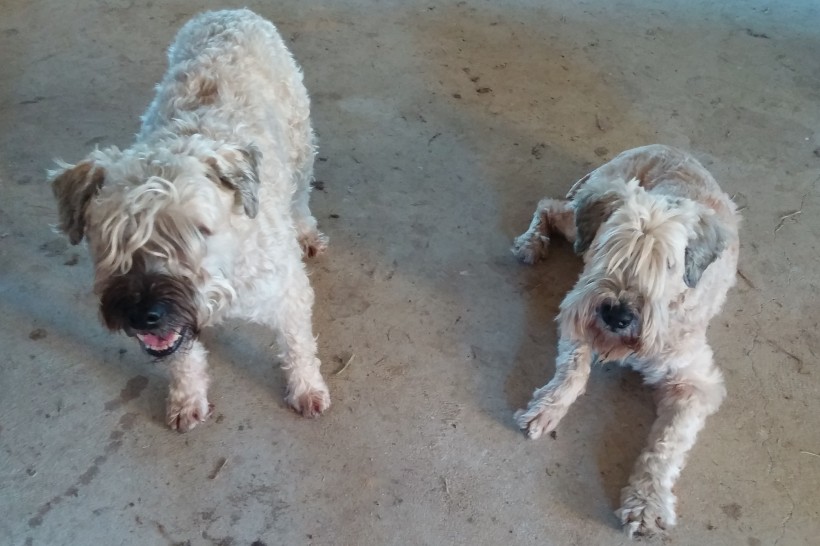 Two of them are dogs.

If you quickly concluded that I am the third one referenced, you are already enjoying this more than you should.

We are of differing personalities, Gracie, Molly, and me, but the common view we have of life through our respective, aging eyes is uncanny. For starters, not one of us enjoys going to the vet — er, doctor — and we pride ourselves on our clever avoidance tactics. For example and I must say, showing great foresight, Gracie refused to go on car rides for weeks after her last, eventful visit to the vet. Molly is not so cunning as Grace. Into the car she hops, but at the vet, she will hide under the waiting room bench, shoving her big, black nose against the back wall in complete dismay.

I am clever, like Grace. I am married to a doctor so asking his opinion of my nagging cough is as good as going to the doctor, right? Unless your doctor/husband turns on you – which he did, because he is more loyal to his profession than to your idiosyncrasies. Rats.

So, yes, that means Gracie, Molly, and I have all been to the doctor in recent weeks and we are all equally grouchy about it. I, at least, gave Gracie and Molly sympathy.

Another thing we have in common is that we are each rather particular about our personal space, or should I say spaces. Molly’s space is the far corner of the family room sectional. Molly has other spots, but that is HER spot, no exceptions.

If ever another of the dogs gets the idea that this spot would be a pretty nifty one to claim for their own, Molly will stand inches from their slumbering body, staring like a setter on point, willing the offender to wake up and get down (Molly is a pacifist at heart).

I immediately come to her aid because I know EXACTLY how it feels. The other day Gordy sat in the chair at my writing desk — which is in the corner of the bedroom — to put on his socks. Seriously, both of them. I was shocked, so shocked that for a moment I could only stare in horror, like Molly. Then I laid down the law (I am not the pacifist Molly is, at heart). Gracie has spots all over the house. Funny thing is, none of the other dogs ever make the mistake of trying to claim one of Gracie’s spots. She just has a way about her — even when sleeping.

Yes, I want to be more like Gracie. Sorry, Gordy.

Another thing is we all like to go to bed early. The above pictures of Molly and Gracie sleeping are actual, real time, 8:00, and apparently it’s time for bed pictures. I, at least, am still perched at the computer, but Gordy is traveling and the heated blanket is turned on, so there’s not much stopping me from landing there very shortly. I would like to say it’s because we are all such early risers, but that would be an outrageous lie. In my defense, I am still on nighttime Giada (aka “The Barker”) duty which means at least once or twice at night I am up and out in the back yard helping her find her calm spot. Molly is the worst, or should I say the best at this. She would sleep through a bomb scare. She sleeps through Giada’s barking which is pretty much like a bomb scare. It helps to be mostly deaf, but she doesn’t even really try.

Now, I have to say I have enjoyed Gracie’s increased penchant for sleeping. In her younger days, Gracie was the mighty hunter, the feisty one. At the ranch in California, she ran her “trap line” as we called it — all the places a squirrel or mouse once hid or would ever think of hiding and it would take hours. If she ran her trap line after dinner, it usually ended with me trudging around with a flashlight in order to find her and tuck her in for the night — kind of like breaking the spell and turning her back into a pumpkin again. Gracie doesn’t do night rounds anymore. She won’t miss a trip to the barn, but she knows when the outdoor clothes get hung after bed check, that is permission to snuggle in for the night. And that is exactly what she has been more willing to do — snuggle. Last night, Gordy and I were lingering over dinner. I do that; hang on to him a bit longer before he travels, stocking up on him to sustain myself through the next days to come. I was chilled from my last run to the barn. It is bloody cold here right now and I still have this nagging cough (which turned out to be walking pneumonia; yes, Gordy was right), so upon my return, I wrapped myself in the afghan and Miss Gracie said hey – me, too. I made room and we sat like this for the rest of the evening.

I think having old lady things in common is a good thing. I like growing old with these two creatures, though I am aware that we are not on the same aging continuum; a very sad point, indeed. I am really counting on Gordy here, hoping that he keeps finding it in himself to put up with me, old lady traits and all. So far, so good. Just as long as he stays away from my writing area, we should be fine.