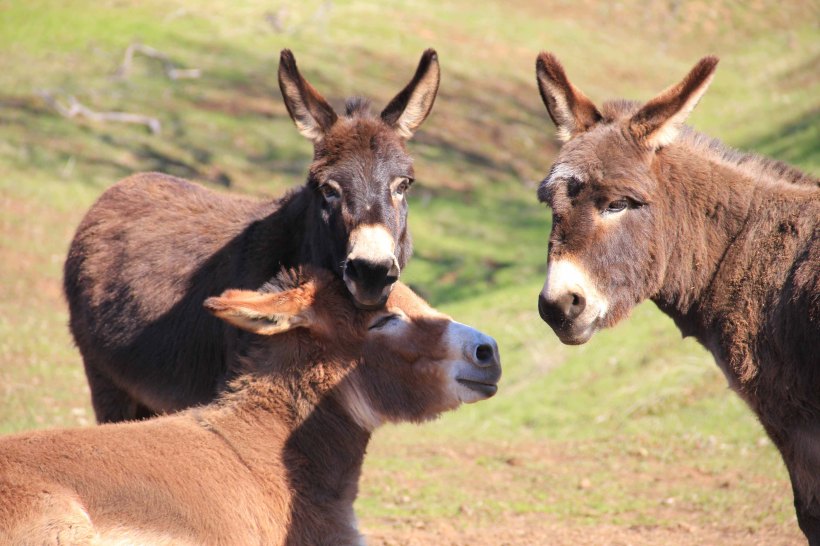 I am an interpreter of a language of small things. There are some days when this is mostly all of what I do. Gordy travels and the phone brings words, but otherwise, I am here alone with the tribe. We find our way together — the dogs, the horses, the donkeys, and me — sharing a space with no leashes or cages, no ropes or halters. We have come into each others languages in about equal measure; my words, their body animation and telepathic inquiry. Slowly, we have turned interaction into mutual agreements as to how we wish to be treated, how we wish to be connected. I keep a mental catalog of it and I think they do, too, but especially I know that the donkeys do because it is in their nature to be discerning. So, I will talk about them first.

Donkeys have their own language. It is similar to horse in the way that, say, the King’s English is similar to American English. Don’t make the  mistake of confusing the two.

When a donkey speaks with its voice (braying; its own special word), listening is not optional. Acknowledge their communication — it comes from a deep place. I throw words out like candy at a parade, until they are satisfied with my efforts and then I try to fix what warranted the communication in the first place. It is usually short and instructive:

“Do you know it’s dinner time?”

“Loosa is picking on us!”

Eye contact is important to a donkey; the presence or diverting of it. You can drive a skittish donkey away, standing still, holding too much eye contact. You can drown your sorrows in the deep, brown liquid pool of a donkey’s eye holding contact. I have.

It is almost never useful to move quickly or even absent-mindedly around a donkey. Breathing slowly, moving subtly, allowing time for them to consider a request are important, as are getting small and being loving with arms open and soft hands.

If you do intend to be upset with a donkey, it had better be fair. Ask yourself that at least three times. If it is fair, the donkey will forgive you immediately, make up to you even. If it is unfair, you will have extra miles to tread to make up for it. You don’t decide when it is enough; the donkey does.

If you are asking a donkey to go ahead of you and he stops and turns to you, drop to your knees and be thankful for his dear companionship. He needs reassuring. Rub the part of his body that he presents, even if it is his butt. Especially if it is his butt. Dwell there in that space until you feel the “all is well” in the whole of his body.

Think pictures to them of what you need — standing still to have their feet trimmed, loading into a trailer  — and make allowance for the way they need to adapt that picture. They are most eager to comply with all reasonable requests, but never if they are rushed into it. Never.

Our donkey tribe is a team of three. We chose BJ and Elliott, but Annie chose us and we were keen enough even then to know the awesome honor of that. They were never together before they came home with us, but they walked off the trailer having made a pact of kinship and have never been apart since. Therefore, anything you do to one donkey, you do to all. If BJ needs eye ointment, everyone stands close and must have their faces touched. If Elliott is reluctant to go in the stall for feeding, BJ and Annie must be allowed to pop back out until he’s ready. That’s the deal.

And, no, I am not the only person who gets this, who is a part of the language of small things. Like I said, donkeys are very discerning.