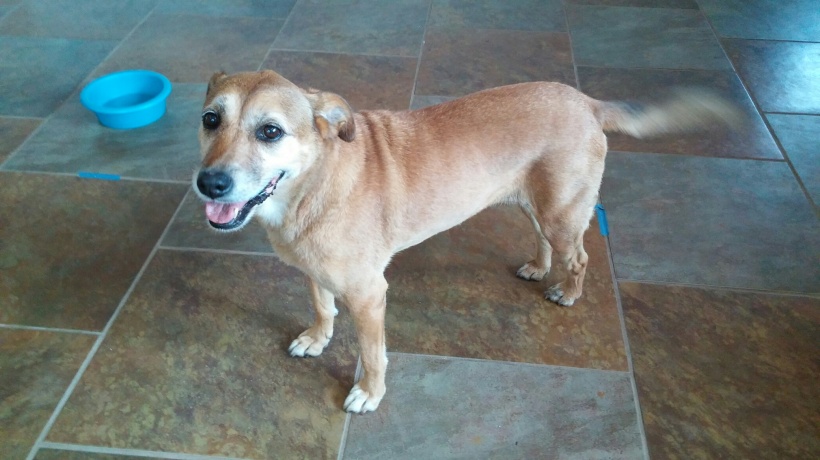 Daya comes from a farm about half a mile or so away from us. Of course, we didn’t know that then. We didn’t know her name and we didn’t know where she belonged, although we were fairly certain she belonged somewhere….she was healthy enough and well-fed. We are the whole of 20 acres, surrounded by no-climb fencing, certain enough of a barrier for keeping in little Miss Monroe (all petite, agile 29 pounds of her). There is only one opportunity for access right now and that is under the motorized gate in the front yard where our pups cannot access; a gate that is, just this day, being readied for relocation to assure a fully secure perimeter.

Gordy was fixing dinner and saw her out the kitchen window, standing in the front yard, nose high, with one paw frozen in the air, wary of where her next step should be.

But, she was in our front yard and so, so unhappy about the grumbling thunder clouds overhead, and that means it was ours to figure out. I went out the door, which immediately caught her attention, and crouched some 20 yards or more away from her.

Afraid of the thunder, little girl? We’ve got a houseful of that inside. Want to come here and feel safe?

A long pause, alternatively looking up at the sky and then over at me and then a decision, half trotting, half slinking over to sit by me, quivering like one should when the thunder is getting big.

She had no collar to lead her by and I am not one to be overly familiar with a strange dog, but she made it pretty clear that picking her up was appropriate in these circumstances. And so I did, carrying her into the house through our doggy gauntlet, large and small, and barricaded her into the bathroom.

She’s an older girl and her relief at being inside was immense and earnest. We brought her food and water and a blanket and bed. She wanted all of these things and also to be hugged and snuggled, so we gave her that, too. It didn’t take long for the rest of the pack to resolve their questions about her and we cautiously let them begin to interact. Okay, now to find where she belongs.

We posted her picture on lost dogs sites, but that didn’t feel like much of an effort. It’s Sunday evening and nothing is open except the emergency vet across town, so after dinner we asked her how she felt about going for a ride. Yup, that was good and so off we went. Turns out, she has a microchip, but the registered owner was identified as the Animal Shelter. That couldn’t be right anymore; besides they’re closed, so back home we go. She is equally happy about that.

We tried to gate her in the bathroom for the night so the maremmas could roam and patrol and we wouldn’t have to worry about unsupervised interactions. We needn’t have worried. Waking up in the morning, we found the gate pushed open and the little pup curled up on the doggie bed outside our bedroom door.

I spent the day pursuing leads with help from Animal Control who provided me with a bit of data on who had adopted her, some ten years ago. I researched and left messages on the voice mails of strangers and then, mostly went about my day and everywhere I went, she went along, a happy, wagging shadow.

By the afternoon, I had figured out where she belonged and had arranged with her owner to come and pick her up. That’s how we learned her name and where she lived and how old she was. I was glad that this happened. I was. I was also just a little bit sad, because she had been such a pleasant little visitor and companion.

It rained again today, starting earlier than usual. Darn, I wasn’t quite ready. I gathered the “it’s a thunderstorm” gear together and began wrapping Gracie into her “burrito” (aka thunder shirt). Gordy was on the phone pacing the house, as is his tendency when he is engaged in conversation. And then he waved his arms at me, pantomiming to get my attention:  Look outside.

I saw just the slip of her in the landscaping at first, but she must have known I would come because she was at the front door by the time I could get it opened.

She was mighty pleased with herself.

We loved her up and she joined us in our collective group huddle, open to whomever is scared and needs a little support.

I confess, I did not make the call about coming to pick her up until the storm was over, well over. She is sweet and dear and has such a gentle, soft countenance. I so very much enjoy being in her space. I did call, though, and her owner, somewhat chagrined came again to pick her up. Once more, I am glad she is safely home. I am. I also can’t stop myself from peeking out the window for movement in the front yard and I am now deeply conflicted about the impending changes to the front gate, made necessary to keep my pups safe, but which will prevent her from getting in.

But tonight I snuggle my four-legged tribe members and I am grateful, so grateful for the love I have for them and the joy they bring me. And…I remain always open to the possibilities. There could be more.